Our current topic (Climate for those who dont go to Huish!) is widely accepted to be a little bit challenging, so I thought a special blog post on how to learn about this in a different way might be appreciated. So, first of all, a recap on the most basic rules of circulation in the atmosphere, if you dont want to read, the BBC have produced a really outstanding TV show, called "Orbit" which you can watch here, I would consider this a really excellent way to spend an hour, as it makes the entire start of the module easy and is very visual. They even have a blog centre for more reading, but in the mean time:

Earth spins towards the East, if you are attached to the surface (Continents, people, trees etc) then you do not feel this effect, but, for all gases and liquids, the spin of the earth to the East, deflects surface flows towards the West. Hence, all ocean currents, surface winds, hurricanes, are pushed to the west. If the earth did not have any continents, the oceanic currents would just move around the globe, from east to west, but, the continents complicate the issue, and force ocean currents to deflect North, in the Northern Hemisphere, and South, in the Southern hemisphere, along the Eastern edges of the continents.

We tilt at an angle of 23.4 degrees away from an imaginary line that is perpendicular to our orbital plane. Our tilt, or obliquity, does not alter as we move around the sun, therefore, over our summer time, we are tipped towards the sun, summer starting during the spring equinox, through to the summer solstice and on to the september equinox, when we enter winter, as we start to tip away from the sun, reaching our maximum distance, during the winter solstice, or as you may know it, as December the 22nd. This tilt, is what brings us the seasons, and what causes the ITCZ to move over the course of the year.

This really is a key concept in Earth Sciences as a whole. The basic principle, is that anything hot, rises, until it hits an impenetrable layer, at which it must split, and flow laterally along this boundary, loosing heat to its surroundings as it does so. Once cold, it must sink, as it has become more dense, it then hits another layer, and diverges, some goes back to the source of the heat (where there will be a vacuum as material is constantly rising), and some heads in the opposite direction.

You have come across this before: 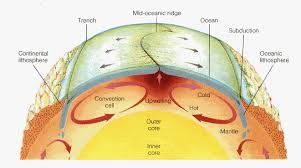 Once you factor in the 3D nature of the planet, and the atmosphere, along with the fact that we are so big, the cells are split into three, you have the global circulation model: 4. With or against Coriolis?

The Coriolis effect, is just the name we give to anything that is affected by the spin of the earth, you have come across it with tides in the Lower Sixth. The key principle to remember, is that anything that moves towards the equator, is slowed by the Coriolis effect, and therefore is always deflected to the West. If the opposite occurs, if a movement of liquid or gas moves towards a pole along the surface, it is boosted by Coriolis, and moves with the turn of the earth.

If we are talking Jet streams and Rossby waves, this difference in speed is what controls the path of Anticyclones and depressions beneath the junction between the Ferrel and the Polar cells. These regions are often referred to as the Horseback latitudes. Hence, when the meanders on the Jet stream (which we call Rossby Waves), start to head towards the equator, they are slowed, and therefore pressure builds up in the upper Atmosphere, and all the excess air has to start moving downwards, ie towards the surface, this is what is found in the ridges of the waves (Closest to the poles), whereas in the troughs, the air starts to accelerate towards to poles, leaving behind high altitude low pressure, therefore, to fill the void, air has to be sucked up from the surface, creating a low pressure system, more commonly called a depression:

There is an excellent animation of this on the TV show recommended. This passage can sometimes get stuck, as happened in July 2008, and December 2010, as this diagram explains: 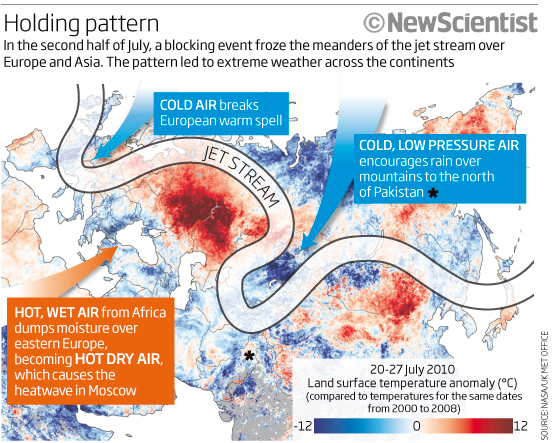 This is the driving force, which starts the tri-cellular model, the ITCZ stands for Inter Tropical Convergence Zone, literally, the place where the surface winds of the Hadley cell come together, and where the most intense heating of the earths surface takes place. It can easily be seen on most satellite images:

It is not a straight line, none of the boundaries between the cells are, and it moves as the earth rotates around the sun. In our winter time, it is more southerly, and over our summer time, more northerly. Where it crosses continents that sit beneath the two extremes, it causes a seasonal reversal of the winds, and this change, brings about the Monsoons: In India, this results in the onset of the seasonal rains, this dictates plant life, agriculture and water storage, and is not always reliable. It arrives at different times of the year, depending on how far away from the Western Seaboard you are, and can be mapped like this: The Monsoon brings between 4 months and 6 weeks of intense heavy rainfall, and along with the UK climate, is your major case study of a climatic zone.